Today is the 70th anniversary of the justly renowned Doolittle Raid on Tokyo. While it caused negligible physical damage, the raid was a propaganda coup for the US, interrupting an unbroken string of Japanese victories on land and sea with a demonstration that perhaps the enemy was not invincible. More significantly, the raid led the Japanese to shift their strategic focus to defeating the American carriers by luring them to destruction. We know how that ended. What is sometimes glossed over is the extraordinary daring at all levels that made the raid happen.

For starters, the B-25 bombers used in the raid were never designed for use on aircraft carriers. Remember that this is long before the use of steam catapults and thousand-foot supercarriers; USS Hornet was under 800 feet in length, and with all 16 bombers on the flight deck, the lead plane had less than 500 feet to get airborne -- using its own engines and a headwind -- at a time when it was not all that uncommon for much-smaller fighters to ditch on takeoff. (The last bomber in line, meanwhile, was spotted such that its tail stuck out over the stern of the ship to maximize takeoff space.) 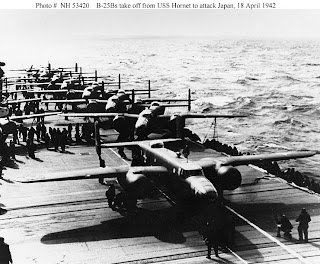 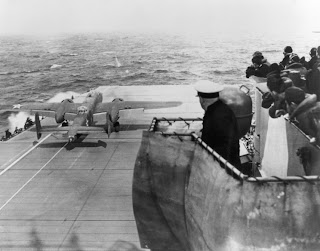 The raid itself was acknowledged up front as a one-way flight, as the planes had neither the range nor the ability to return to and land on an aircraft carrier. The idea was that the planes would land in unoccupied China, but most crash-landed and one crew was interned in the USSR for over a year. As such, the crews were all volunteers. The carriers, a precious resource themselves after the devastation of the Pearl Harbor attack, launched the raid early, having been spotted by a Japanese patrol boat, and retreated with minimal air cover out of danger.