For the regular readers of this blog this may seem like Spinal Tap's diversion into jazz rock, but I have been meaning for some time to begin a series on the design, planning and construction of my N scale model railroad layout, which began in earnest approximately thirty seconds after our bid on the house was accepted. (In fact, our realtors knew to look for a house with a basement with a "train room," defined as a room with few or no windows and lots of uninterrupted wall space, once they noticed that the first stop on a Dave-led house tour was the basement. Not only did they find a train room, they found one with its own bathroom!)

Laura very kindly gave me a nice gift certificate to a top-notch train store, and for the stuff under the tracks (tables, framing etc.) I have scoured Home Depots in two states, only yesterday completing a 50-mile round trip (with a three-year-old whose last words before he fell asleep in the car were "I don't like Home Depot!" - imagine his reaction when he woke up in the parking lot of same) to procure a large quantity of extruded foam insulation for scenery and track base. Two weeks ago I procured the services of a friend with a truck, whose wife needed him out of the house while she planned his surprise birthday party, to get the large sections of plywood and framing lumber. (And they thanked me!)

The trackplan as it currently stands is this (rendered by XTrkCAD): 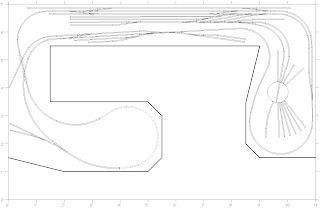 There is a 2% grade down from the right of the turntable to the final leftward curve, then a 2.2% grade up from the beginning of the tunnel at the bottom of the diagram to just before the double bridge. I will be using Atlas code 55 flextrack, and C55 #5 and #7 turnouts, with a minimum radius of 12". That is a bit tight, but as I am modeling the mid-1950s transition period I plan on using smaller steam and diesel engines and a mix of 40- and 50-foot rolling stock, so it should be OK. (With two small children, not to mention myself, continuous run is a Given rather than a Druther.)

Control will be interchangeable between DC or DCC; I plan on starting with DC with four general "blocks" which will double nicely as DCC power districts when I make the plunge, and after that it will be useful to use the main line to break in engines awaiting decoders. Although I have a fair amount of engines and stock from may last foray into N scale in the early 1980s, I know that the C55 track will require lots of upgrading of older equipment so there will be few engines on the layout to begin with, so less need for power isolation. (Part of Laura's gift certificate went toward the purchase of a beautiful Bachmann Consolidation that I cannot wait to put to work.)

I have some pictures of raw materials and raw layout space that need to be uploaded, and they will get into the next update post, but I wanted to get this off the ground sooner rather than later. As it is, the official start date for construction was February 7 so I am already a week behind. However, today I was able to make all major cuts on the plywood subsurface, with the next step being the framing of same, construction of L-girder supports for the larger sections (shelf brackets will hold up the yard) and fitting of foam to plywood. Stay tuned!

(For those of you coming for the trains, please make sure to poke around the rest of the site, as I believe there is truly something for everyone, here or in the links at the right edge of the page. Enjoy!)

Update 2/16: In comments I attempt to make the distinction between "train set" and "layout." Don't worry, though, I won't get as upset as Count von Zeppelin:

1.
Your being one week behind schedule is a consequence of the now infamous Mancold and illness is no fault of your own!

2.
Please, for the love of God, let this train blog series not reach a conclusion until it describes in detail the Grand Opening train set party to which I most humbly request an invitation (I'll even buy an engineer hat & wooden train whistle for the occasion)!

3.
Most of this technical Mumbo Jumbo is lost on me. However, when I Googled "Bachmann Consolidation", what I saw was a cool looking black steam engine that looked like it had the power to pull a loooong train. To recall another recent posting of yours - amirite?

4.
My brother, Ralph, spent 20+ years as a model train enthusiast using Marklin Trains HO scale and built quite the elaborate set up in my parents basement (JJV can attest to this as an eye witness). I believe, at it's peak, he was able to operate 6+ trains, a mountain tram and even had flowing water in one section. For professional interest, I shall send him a link.

I like the trend toward four-part comments. Are you people using WiFi in a barbershop?

Powa, to answer you:

1) It is a measure of the Mancold that the power tools and lumber sat in the basement all week while I battled it.

2) Strictly speaking the correct term is "layout" rather than "train set" but the kids will probably refer to it as the latter so I may end up using both terms interchangeably.

3) Apparently the engine is quite a good puller although I will most likely not be pushing its performance too much. With the length of main line and yard tracks I'll have, trains of 8-10 cars will be run.

4) That sounds cool. Unfortunately Marklin just went under, I think, although I suspect someone would step in to acquire assets etc.

And J, all I can say is, whatever gets the train into the tunnel, baby. (The Zeppelin update was a total coincidence, wink wink.)

If you need any help, let me know.

Thanks for the offer, Dave, I will keep you in the loop.

I knew there must be some loco motive to get you up and running again, Dave.

Shave and a haircut, two bytes.

This will be a blast for you and the kids! Have fun & make sure you have plenty of ventilation when you start building models.

Frankly, all those gizmos sound like they are from the golden age of colonic irrigation.

The golden age of colonic irrigation... ahh the memories of barium enemas of yore. A great tank of barium lays in waiting with a long hose down to the exam table. 20-30 patients a day, change the tip between each one (but any backwash into the hose/tank remains). Scary? maybe, but sadly all too true.

These days every patient gets there own self contained disposable barium bag.

"it is a great honor to have so many members of the government dead in our sitting room (drawing room) ...we could sort them out and make a little list - ministers for external affairs up against the wall and those who are internal by the clock" -Monty Python is sheer genius!