Layout Update #8: There Will Be Foam

In real life, railroads surmounted geographical challenges like mountains, rivers etc. by often-spectacular feats of engineering, such as the Starucca Viaduct or the Tehachapi Loop. The modeler usually wants to represent at least some sort of modest conquest of nature to provide some visual interest. Unlike the real world, however, the modeler is responsible not only for the feats of engineering, but for the actual geographical challenges. Further, the challenges themselves must usually be subjected to what is known as "selective compression," the trade-off of "actual-size" rivers/mountains/etc. for something that can a) suggest the actual-size challenge and b) fit the allotted space. (As an example, a full-size model of the Starucca Viaduct in N scale, in which one inch represents 13.3 feet, would be 6.5 feet long and 7.5 inches tall.)

Despite these various challenges, most model railroaders, including myself, want to have their trains pass through different kinds of scenery, and in fact, when I was planning the layout, I specifically included a tunnel, a bridge, and a change in track elevation in the requirements for a layout.

Over the past weekend I was able to put in a pretty good chunk of relatively uninterrupted time in the basement, and am close to completing one of the major engineering challenges: the transitions from the lower track elevation to the higher elevation, then back down. These transitions take place on the "rural" section, primarily within the curving tunnel, and in the loop around the engine terminal. I judged the rural transition to be the easier of the two, and so decided to get some experience by tackling that first.

First, here is the layout in two dimensions: 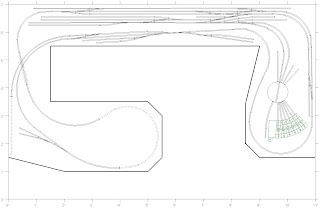 And now, for the first time, in glorious 3-D! 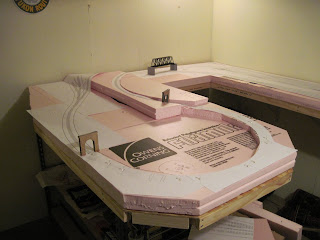 You can see that I used the "blunt instrument" approach within the tunnel by raising the entire outside section of the foam from left to right; this happens inside a mountain so technically no one can "see" it. (The side of the mountain nearest the camera will be open for maintenance, however.)

The next picture shows how I supported the foam on a riser of 1x2 and 1/4" plywood scraps, with the plywood extending to support the next section of foam: 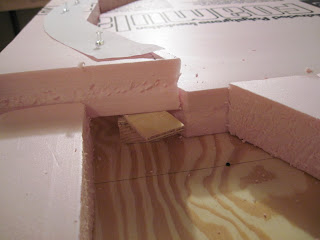 Here we see the next section of foam in position: 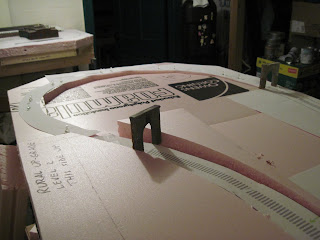 Since this section of the gradient will be visible, I needed to be a lot more careful in designing and building it. I decided to cut two parallel lines about 2" apart, resulting in a strip of foam on which the roadbed and track will be placed. The foam on each side of the strip will be shaped to represent a cut through a hillside. Since tunnels are expensive to build and maintain, real railroads relied as much as possible on cuts, tunneling only when necessary.

Here is a shot of the yard and industrial section. The yard will be set on a second layer of foam, providing a contrast between it and the industrial trackage. Finally, here is a shot of the engine terminal area, which will also be mounted on a second level of foam. The mainline curves around the terminal, with a downgrade from the right of the roundhouse to the end of the far left-hand curve. 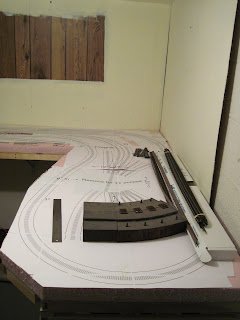 For some reason I now have the "Good and Plenty" song playing on my mental jukebox.

I'll tell you this, the laboring Irishmen of the last century didn't take so long putting a real railroad across the continent. Maybe you could get a Chinese guy to help you with it?

This kind of information is very limited on internet. Nice to find the post related to my searching criteria. Your updated and informative post will be appreciated by blog loving people.