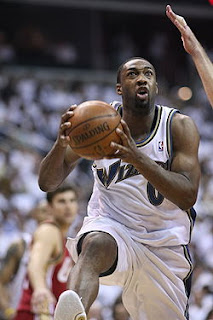 I suppose it's easy to pile on Gilbert Arenas these days. With Tiger Woods in seclusion, Gilbert's locker room and courtside gun show is the toast of the local media. I grow weary of the high-priced athlete turned prima donna gun thug, but it got me to thinking about how The Zero's conduct rates on the roster of poor athlete role models. Here's my hit list; please share yours in the comments:

1. Even in the annals of DC sports, Dino Ciccarelli's alleged impersonation of Roman Polanski in a clubside limosine was perhaps our darkest day, although he wasn't ultimately indicted. I guess history's final and disappointing ruling on the incident is excessive celebration, although I wish he had mustered enough decency to save this conduct for the doorstep of the Red Wings, where it would just blend into the daily news.

2. I've elsewhere lamented the Gilbert-esque off-field thuggery of sometimes Nationals Lastings Milledge and Elijah Dukes, but I have to reserve my strongest baseball-related condemnation for Jose Offerman. Here is his body of work, but I hasten to warn you that the slideshow is unsuitable for youngsters or those already excited for Opening Day. Incidentally, the catcher who got the worst of the exchange, John Nathans, hasn't caught a game since the incident, as if that were the worst of his residual problems.

3. Who knew that a pulse beats somewhere under the ice-covered tedium that is women's figure skating? Flying in the face of conventional thinking, however, we have the coup de Gillooly that Tonya Harding brought to bear on an innocent Nancy Kerrigan.* WARNING: Before clicking on that link, if you haven't kept up with Tonya Harding since the 1994 US Figure Skating Championships, well, you should know that she's kind of let herself go in every sense of the term. I'm actually throwing up a little bit at the thought that she has a celebrity sex tape out there somewhere. 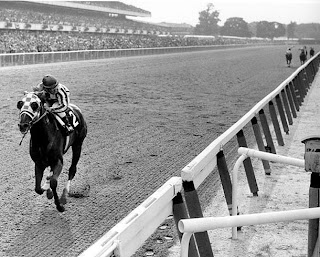 4. You wouldn't have known it to look at him, but that Secretariat was a real showboating bastard. What, five lengths isn't enough for you? You have to make everyone look bad?

For happy hour this Friday, January 15, please report to Againn Gastropub, which is located at 1099 New York Avenue, NW, a couple blocks north of Metro's Metro Center station. Againn sports excellent bar fare, an impressive beer list, and enough single malt scotch to force that image of Tonya Harding out of my head. As always, we'll kick things off at 6:30.

* In the spirit of full disclosure, I must advise you that Nancy Kerrigan is the official figure skater of the on-going happy hour. She earned the honor when she encountered a post-happy hour contingent as it was clearing the carcass of a keg from an alumni dinner. She was far more lucid and clever than any of us at that moment, and I'm sure her comment would beat anything that Kristi Yamaguchi could have thrown out there.

UPDATE: 1/13/2010--Powa notes in the comments the whole 2004 Ron Artest matter, in which Ron Artest essentially forgot his role as an NBA player. This raises the whole genre of athlete meets fan while athlete is being paid to do something else entirely. I believe this genre was invented by Ty Cobb.
Posted by JWT at 1/12/2010 09:31:00 PM

Another Day of Infamy for the NBA.

Ron Artest CHARGES INTO THE STANDS and instigates a melee that involves several memebers of the Indiana Pacers and Detroit Piston's fans. Fists fly, beers fly, chairs fly - it's ugly. Artest is suspended for the rest of the season (~ 70 games and over 5 million in salary).

I personally think the problem is with D.C.'s stupid gun laws. Same with NY and a certain Giant who shot himself. The idea that any American goes to jail on a first offense for bearing arms or negligent discharge of a weapon that only injures himself is ridiculous.

Ten miles away in Virginia the worst Arenas would face is a fine for improper storage or the like. Gun possession is malum prohibitum no malum in se.

Regarding Arenas, we need to distinguish between legal consequences and NBA consequences. In a different jurisdiction the potential legal consequences may well be different, but my understanding is that the NBA would deal with this the same way regardless of where the NBA venue is located.

Finally, not only was Secretariat a showboater on the track, but his offtrack exploits are legendary as well, being rumored to be hung like a ... oh never mind.

Ummmm....I'll have to tell you how fun this story has been for me!!!

Looking forward to it!

Nancy said: "Looks like the party is over, eh boys?".

Something like that. We were in such a fog and she was standing there with her boyfriend's daughter so it was impossible to put the scene in real context.

I think WB realized first our near brush with fame a mere 40 seconds following the consensual social encounter.

To add to Elijah Dukes' problems, even Milton Bradley said he's messed up.

Ouch, that only leaves him eligible for the Dominican Spring, Summer, and Fall leagues.

There's always hockey, or he could marry an figure skater with a potentially checkered future...