When we last made plans for your itinerant drinking, we discussed the subject of athletes behaving badly. Barely had I brushed away the cobwebs from Friday evening's cavorting when last week's second case study, Jose Offerman, got himself banned from the Dominican Winter Leagues for hitting an umpire. Of course, he seems to have again swung at and missed his primary target, leading you to wonder how he managed to make it to the major leagues in the first place. In any event, as shrewd commenter JWE notes, we know a former figure skater who would be a terrific match for him.

For a change of pace, we shall this week honor the more peaceable common geek, who contributes mightily to your lifestyle day in and day out without striking anyone, corrupting their data, or f'ing with their science fair project. Love your DVR, your postage stamp-sized phone, or your talking GPS thingie? Hug a geek. For my part, I raise two geekly contributions that I find fascinating this week. 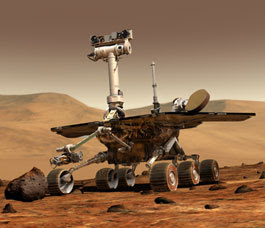 First, we haven't been paying much attention to the Mars rovers lately, but it shouldn't escape our notice that the original contract specified a lifecycle of 90 days, whereas we are now smack in the middle of the 6-year anniversary with relatively good performance. Sure, hapless Spirit is technically stuck in a sandy morass; I still defy you to find an Earth-oriented contractor who is more prideful in his/her work.

Second, it took a numberless legion of nerds working in a whole array of disciplines to bring you the chance to purchase this Flanker C (or a second one that is currently being worked up). Regardless of the price tag, it is remarkable to anyone who had to suffer through "Red Dawn" at the insistence of his high school buddies that a fourth-generation Soviet interceptor is available to any of us as private citizens. Aside from the politics of it all, I see two potential benefits to owning this: 1) when Gilbert Arenas displays his darling little handguns and asks you to "pick one," you can marvel at his profound short-sightedness; and 2) this baby is hangared in Rockford, IL, so you're only a few short minutes from making a big splash at your college reunion (and if you don't ease off the throttle a bit, from blowing out all the windows in the new science building).

Crap! I love nerds but won't be able to make it on Friday.

A piddly jet fighter? Please. How about a Space Shuttle?

I really must get down to D.C. on a Friday.

"Suffer through Red Dawn?!" You are dead to me.

We would have only suffered through Red Dawn had it been the Soviets, but it was only our little neighbor to the south whom we were fighting and we know how powerful they are. So I'd say we weren't suffering, just slightly irritated.

And look at our Mars rover...stuck in a sandy morass and still performing...American ingenuity at work. I might just break out into Team America's song right now: "America, F**K YEA!"