As a final comment to last week's happy hour message, blog consort JJV posed an interesting question. As a father of six year olds who speak of little other than dinosaurs, he wonders why species like crocodiles and turtles somehow survived the Cretaceous Period, whereas dinosaurs could not. We at the happy hour are willing to take a shot at any issue that troubles a happy hour follower, especially if it requires a level of analysis that might satisfy a six year old. Therefore, I have ginned up an answer based on equal parts uninformed conjecture and fifteen minutes with Google. 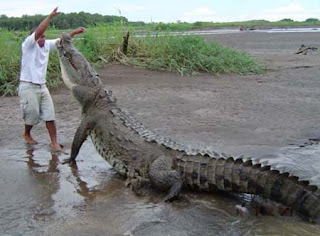 I first present you with Exhibit A, which is a photo of exactly one-half of the species that we're talking about. What occurs to me initially is that this is precisely why I have trouble relaxing while golfing in Florida. I also note that it is impossible for an animal to survive like this for 65 million years without having a supremely efficient design. You can use the search engine of your choice to draw a similar conclusion about tortoises. By contrast, the dinosaurs were apparently caught up in the evolutionary brush. If they were alive today, I expect that they'd look like Michael Moore.

Now, this is the kind of inductive reasoning that might placate a slacker teen, but I sincerely doubt that it is enough for the probing questions of a six year old. Therefore, I'll move on to a level of deductive analysis, or as I like to call it, the factors that would make living at the end of the Cretaceous Period suck.

1. Being warm blooded. Some paleontologists believe that the dinosaurs were warm blooded, and let's face it, moderating body temperature requires a lot of energy. Creating a lot of energy, in turn, requires a lot of food. Acquiring a lot of food requires a lot less chaos than existed at the end of the Cretaceous Period. Crocodiles and turtles, on the other hand, are cold blooded. They can move to a pool of water that's deep enough to find a temperature that suits them, then come to the surface for a breath of air every thirty minutes for 65 million years. Problem solved.

2. Being massive. Once again, being large requires a lot of food. You could ask Mama Cass Elliot, but she's also extinct, reportedly in the act of acquiring food. In the post-asteroid/super-volcano world, the collapse of the food chain hit the largest species the hardest. In fact, at least two species of large crocodile became extinct. That photo above is just a wee one.

3. Being a carnivore. Honestly, you're going through the biggest die-off since the Jurassic Period, and you need a specialized diet? Having a little salad wouldn't kill you, you know. I grant that crocodiles are carnivores, but look at their lifestyle. They hang out at the edge of a pool until their meal comes to them. It's like Domino's for aquatic reptiles. Plus, being cold blooded, they don't need to eat very frequently.

4. Being in the wrong place at the wrong time. Sometimes stuff, like asteroids and what not, falls from the heavens. Try not to be under it like this guy was.

So that, JJV, is my very shallowly informed answer. Let me know how it plays for the boys.

For happy hour this Friday, March 19, we have a special treat, as we have at least the potential to explore a neighborhood. We'll start at Granville Moore's, located at 1238 H Street, NE (yes, that's Northeast DC), a short cab ride or a nice springtime stroll from the Union Station Metro stop. But who's kidding whom? We might never get very far from Granville Moore's, even though there are plenty of other great places nearby if we get tired of Belgian food and beer. We'll kick things off at 6:30.
Posted by JWT at 3/16/2010 10:35:00 PM

That was one of the funniest posts I've ever read.

While not a slacker teen (nor was I ever one), that explanation totally placated me, JWT.

Only wish I could meet up with you guys at Granville Moore's on Friday to hear what JJV has to say -- and asks next. (Hmmm... beer and fries.)

Speaking of slackers, if work and family (i.e., having a life) continue to prevent Dave from posting, maybe he should consider re-naming the blog "Happy Hour." ;-)

This is pretty good except that 1. I always heard that the mammals survived by being warmed blooded and I'm not sure all dinosaurs were warm blooded; 2) Not all were carnivorous; 3) not all were massive. In fact I'm informed by the boys that "some were like chickens" in size. Finally, they could not all have been hit by asteroid bits. Also, while not dinosaurs(I hasten to note) the "sea reptiles" seem just like turtles to me but some of them bore live young. This would seem to me to make them even less likely to die off. Seems to me the pleisesaur is the perfect beast and should still be around. The itchysaur is simply a reptilian dolphin. This just does me no good. too much work, can't be at happy hour.

J - you're welcome at HH anytime! If we know we'll have special guests in advance, they're featured in the HH announcement.

JWT - I will be there. Thanks for an excellent post. I don't think I've ever been inspired to think about dinosaurs.

Hey, what is this, chopped liver?!

J--I really love your blog, but I get tired seeing you do the work of six people over there.

JJV--If you'd please refer to your original question in the HH 10 comments, you'll note that you essential asked why crocodiles and turtles survived while tyrannosaurs did not. I'm sorry that I didn't answer the question you failed to ask. I'm also sorry to tell you that pleiosaurs were wussies.

EMM--There will be a good crowd again this week, so you're hitting all the must-see events.

P4500, like SNL, peaks every 4 years during an election year. That's when JJV get's on a roll & the others riposte.

After reading this post and the above comments I am "thisclose" to driving down tomorrow and meeting up with you guys. For reals.

@Powaqqatsi: So I have to wait another two years, though, on the upside, Dave should have finished the layout by then. ;-)

Home from the hills in just 1.1 million seconds.

I'd actually like to hear the conversatin between the lawyer and the six year old.

Hi all. I will finally be joining the crew for HH this week. And since I'm driving into the city, I'm happy to drive folks from Union Station to H St instead of taking the bus. Let me know.

Ready or not, here I come! @EMM was very convincing.

Please be gentle with me as this is my first Happy Hour, and I'm actually very shy and nervous in person, especially around people I don't know. (STOP snorting, @Dave S.)

@JWT, what's the parking like around there? I will be driving my Mini down...

Laura and I are in desperate search of a Friday sitter as I write this...

@ JWT - we are humbled at the magic of your HH post.

EMM: please drink a Leffe for me, as I'll be home watching Dinosaur Train! LAT

Apparently, nobody knows the answer to my question even this guy.

Laura and I are a GO for this evening! Yippee!

The archeopteryx has landed.

See you all (or most of you) tonight.