Layout Update #21: Getting Its Spurs

Thanks to a very large window of opportunity opened by Laura, who not only supervised the (officially) awake stages of a sleepover but then made delicious stuffed shells for dinner, I was able to make substantial progress on non-yard trackwork on Saturday. Thanks to some prep work I had done that night, I was able to knock out a bit more today. Behold: 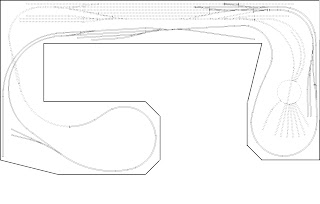 Both the rural industry* spurs at bottom left and the "lower industrial" area in the top middle are complete, as are the Maintenance of Way (MOW) and Repair in Place (RIP) tracks to the right of the turntable. I also extended the interchange staging track to its full designed length along the lower left edge of the layout. As I mentioned in the previous update, this will allow me to actually run "real" trains, in that I can drop off and pick up cars at various industries, then send them on their way. This is a major operational milestone and I am very pleased to have reached it. 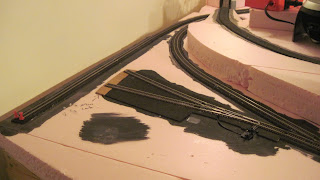 Next, the completed sidings of the "lower industrial" area. The red pushpins here and on the interchange staging track are temporary bumpers to keep cars from falling off the edge of their world. 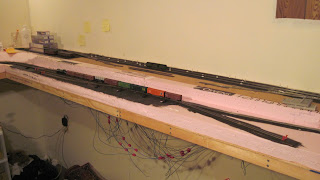 Finally, a look at the MOW and RIP tracks. These were just installed a couple of hours ago so they still have their holding pushpins. In the background you can see the coaling tower and sand** house in their approximate locations. 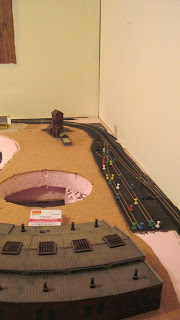 In the shot of the "lower industrial" area you can see some tracks pinned to the cork on the level above and to the rear. These are the main line, passing siding and arrival/departure (A/D) track for the main yard. The next step will be to get those tracks down and the west end turnouts for those tracks in place. Initial test-fitting suggests some very minor adjustment is necessary, but hopefully I'll be able to get to that soon.

I probably won't be able to make it three weekends in a row, but one never knows!

*By "industry" I mean any location that generates railcar traffic, not necessarily a factory or even, in some cases, any structure at all. For example, one of the rural spurs represents a team track, which will have an unloading platform but no actual building.
**Sand has long been used to enable locomotives to get a better grip on tracks, especially when climbing grades.
Posted by Dave S. at 9/25/2011 10:50:00 PM