As most of you know, we lost our dog Gracie about a year and a half ago, and it has taken a while to recover from that loss to the point where we considered bringing another furry ward into our lives. In the past few weeks we had begun looking at shelter/rescue websites to see if there was someone out there we might like to adopt, and the week before Halloween we found a beautiful young husky mix who would be appearing at an adoption event that weekend.

Well, it turned out that there were other families interested as well (she was a really neat dog), and after the interview round resulted in deadlock, the winner was drawn from a hat and it was not us. That was harder than I had thought, and I thought I was prepared for disappointment; the kids, meanwhile, were in tears.

Right about then, however, we noticed a skinny little dog -- a Whippet/Labrador mix (or Whipador!) -- and introduced ourselves. She was extraordinarily gentle and really sweet, especially with the kids, and after a bit of discussion we decided to make her part of our family. On the way home, we went through a number of possible names until we hit upon Raven, both for her color and for the impending holiday. 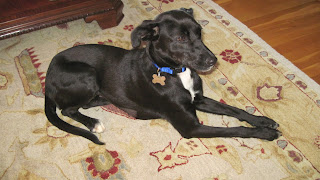 Raven's first week with us was a bit rough, as it was soon determined that she had not only kennel cough but a couple types of intestinal parasite into the bargain. We loaded up on prescriptions and began treatment, but the kennel cough medicine, which has to be taken with food, causes upset stomach as a side effect, so near the end of the week Raven stopped eating. As a result, we ended up checking her in to the vet hospital for a long weekend of IV antibiotics and general care.

Raven came out of the hospital much perkier and is recovering nicely. Unfortunately, since kennel cough is highly contagious among dogs she is quarantined for another three weeks. We are looking forward to getting her energy burned up on long walks and at the nearby dog park, where we are eager to see how fast she can run; I have seen references to a top speed of 35 MPH. For the time being, she is getting acquainted with our back yard, not to mention comfort-testing all of our furniture, but her chief occupation so far is asking for attention:

We are looking forward to introducing Raven to our friends and, yes, even their kids, as Raven is the complete opposite of Gracie who, beloved as she was, did not take kindly to visitors. For the moment, though, JWT, we'll go light on the barbecued chicken.
Posted by Dave S. at 11/15/2011 08:30:00 PM

I would drive 200 miles to pet that sweet-faced pup. Great photo. Welcome Raven! I look forward to seeing many more adorable pictures of you.

Bar-arr! I had a whippet/german shepherd mix who was sweet as can be. Huzzah to the Slatterys!

Congrats on the latest addition to the family! I've lived with whippets before, and I think that a Whipador is likely to be the best of many breeds. I look forward to meeting her :)

Did you know that you can make cash by locking special pages of your blog or website?
To begin just open an account with AdWorkMedia and embed their content locking plugin.