Between late November and early December I managed to get the main line complete from the yard to the bridge, and also installed the station track arrival/departure track and station spur tracks: a total of over twenty feet! There is now about four feet of track remaining to be installed on the mainline not including the bridge: 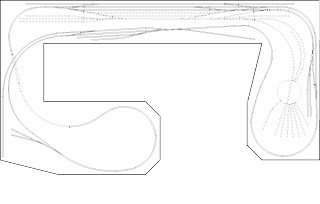 The main and adjacent tracks are not fully operational, as I need to install the servo controls for the four crossovers in that section of track, and until they get installed the turnout points are floating and could easily move while a train is passing through them, causing a derailment. Nevertheless, I was able to at least test the track wiring by slowly running an engine through the turnouts, and encountered no problems.

Unfortunately one weekend day in mid-December I heard a crashing noise in the basement, and upon investigating discovered that a section of the train room's acoustic ceiling had landed on the layout. Fortunately it just missed the NYC RS3 on a nearby track, and damage appears limited to the door being popped off of a boxcar. Nevertheless it was pretty dispiriting at the time.

I need to figure out how to get the tiles back in place (it actually took me a while to figure out how they were held up in the first place) but am also taking the opportunity to make the train room a bit more presentable with a new coat of paint for the walls and trim. I am also going to paint the wall behind the layout sky blue to provide a slightly more realistic backdrop for the trains and scenery.

At this point I have completed the base coat for the walls, and am ready to add the blue paint. Originally I was going to paint a strip about 18-24" high behind the layout, but no sooner had I started marking out the region to be painted that I realized that it would not look as good as having the whole wall painted a single color, which Laura had suggested. With the practice I had with the first two coats, I should be able to get this done on two successive evenings this coming week.

Since the ceiling repair will also expose the electric boxes for the currently totally inadequate overhead lights, I am also taking the opportunity to install some halogen track lighting I picked up at IKEA last weekend (primary mission: pick up cinnamon buns for New Year's Day breakfast).

Once that work is done I will return to tracklaying in earnest and will also get ready to do some scenery on the transition section, since it will be easier to do that before the bridge is in place.

As an extra incentive I cashed in my Christmas gift certificates at my favorite train store (Santa got my note!) and now possess (still in their boxes - c'mon, paint, dry already!) a new engine, cars, a yard office structure, wheels, couplers, paint, and ballast.