The Most Wonderful Time of the Year, Root Vegetable Edition

Happy Thanksgiving, everyone! As our longtime readership (basically JCC and another IP address) is aware, our contribution to the great Orphans Thanksgiving Potluck consists of pumpkin pie and Laura's fantastic mashed rutabagas. 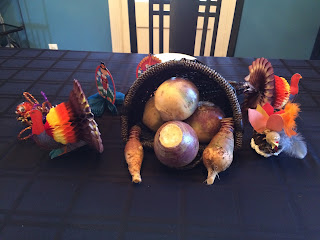 The two smaller roots are from our friend Josh's garden in West Virginia. Overall this year the rutabagas are smaller and I hope I got enough to go around. Our local Harris-Teeter switched produce suppliers and there have been murmurs of discontent in the neighborhood, although their eggplant remains outstanding. 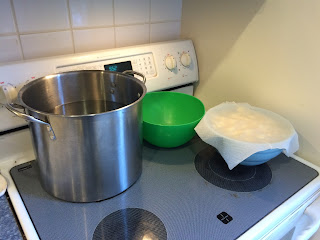 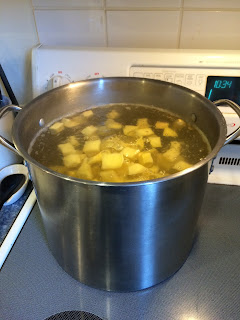 Boil, boil, boil and bubble, filling the house with a great earthy smell in the process.

Not shown: the food-processing and final butter/seasoning application. I was advised that it was a "critical moment" and, as an avowed Kitchen Nazi, I removed myself from the viciinity.

I have just taste-tested the finished product and they are as wonderful as always.

As for the pumpkin pie, I was considering trying the America's Test Kitchen "foolproof" recipe (although I am a great fool) but decided not to at the last minute, as I had never tried it before and Thanksgiving is not the time for radical innovation. However, I did adopt their trick of using vodka instead of water when making the dough, so we'll see how that goes. (In the crust, silly.) Credit for moral support this year goes to Bryan, who not only helped mix the filling but watched quietly as one crust gave me grief on the pastry cloth. Thanks to him I did not fling it across the room, but that pie will definitely be of the "hold your applause" variety. As for the new recipe, I think I will bake more pies and try it out before November rolls around next year.

Happy Thanksgiving to you and yours, David! (I'm here for the comics section)

I respect your choices in comics. Kate Beaton is a (Canadian) national treasure.