After yesterday's respite from shoveling snow we got socked with another foot of snow and high winds, which continue to roar outside our house as I write this. Indoor activities thus were the order of the day, and while Laura put in a few hours of work upstairs and the kids busied themselves with craft projects and the Big Blue Babysitter, I spent a ton of time in the basement and made great progress on a couple of fronts.

Much of the progress was actually made possible by being able to put in a few hours here and there over the past few days and even over the last couple of weeks, during which I was able to do a fair amount of prep work for the actual laying of track.

The first thing I did was get some landscape work done, specifically the bed of a creek on the transition section. A few weeks previously, I had used part of my Christmas gift certificate to get a couple of cut stone culvert/abutment sets. Using two-inch-thick foam insulation board not only allows the construction of hills above track level (not to mention track gradients between levels of foam), but also the creation of terrain below track level. Hopefully this will reduce the "tabletop" feel of the layout.

I found two reasonably plausible locations for culverts: on the transition section, and on the rural section near the entrance to the lower tunnel portal. Using the culvert pieces as a template, I marked their location on the foam, then drew both the bed of the creek that would pass through the culvert underneath the main line and the approximate start of the downward slope of the banks of the creek. From there I used primarily a serrated paring knife emergency-requisitioned from the kitchen and carved a rough outline of the terrain: 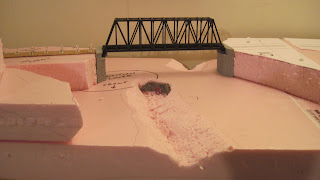 I must say that this was incredibly fun, and while I am no artist, I was reminded of the sense that sculptors can have of seeing the finished work within an uncut block of stone. "Hey, that looks how I thought it would look!" It was a great introduction to basic scenery (I had done almost none on my high-school-era layout and absolutely none with foam) and a good test bed for later work, of which more below.

After an interlude of a couple of weeks during which normal life reasserted itself and kept me out of the basement, the monster snowstorms and resulting time off from work gave me some time to put in a few more hours in the train room in between shoveling, snow fort construction and sledding. Inspired and encouraged by the first culvert/creek location, I next applied the terraforming knife to the rural section, where in addition to a creek and culvert, I carved out a lake to nestle at the foot of the main hill/mountain terrain. My inspiration for this was Bald Mountain Pond, a small, narrow body of water just outside of Old Forge, New York in the Adirondacks. It lies at the foot of Bald Mountain and features some impressive rock outcrops as well as tree trunks in the water and other model-worthy items. Just the place for my N scale deer to forage! 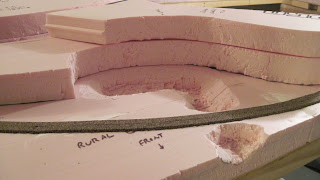 The same day I roughed in the lake, I applied Woodland Scenics Foam Putty to the joints between foam pieces where trackwork would be located, to provide a smooth transition between sections. There are a couple of areas where I am going to need to sand the foam somewhat for a better fit, but overall the surface is ready for roadbed.

With that preparation work completed, I began laying cork roadbed for the mainline on the rural section. Not only was the rural section ready for roadbed, but I could begin the work inside the tunnel and thus hide any unsightly rookie mistakes, as this was my first experience with using latex caulk to secure cork roadbed to foam. Fortunately the only thing I needed to adjust was the amount of caulk used (less) and the technique for applying it (a thin bead for each half rather then a slightly larger bead down the middle). About 75% of the rural roadbed is down; I was limited by the need to even out the foam joint between the rural and transition sections, the need to lower the bridge abutments on the upper grade, and, on a more basic engineering level, a relative shortage of pushpins to hold the cork in place while the caulk dried. Fortunately the caulk dries pretty quickly so I envision the rest of the work taking place in stages. 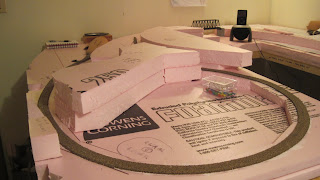 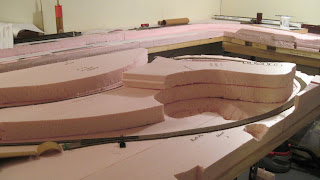 In the first picture you can barely see the end section of the roadbed on the upper grade hanging loose on the foam. This shows both the technique I employed of staggering the two sections of roadbed to help with alignment on curves, and the need to hold off on further roadbed work until I lower the bridge abutments to align with the top of the foam.

Energized by the more visible progress (carving terrain is fun but it's still pink!) I decided that since the mainline roadbed on the engine terminal section had to wait for the surrounding terrain to be roughed in, by God I would rough it in. Realizing that a paring knife was inadequate for the much larger task of shaping hills and embankments, I got the Stanley Surform rasp out of the toolbox and got to work.

First, however, I drew the "top terrain" line on the foam where I wanted the gradient to end. In most places I tried to design for a 45-degree or less slope, since that is relatively more realistic than a Cliffs of Dover approach, but where that was not possible I am planning a combination of rock outcroppings and retaining walls.

Second, following a tip I picked up from one of the discussion groups, I rubbed my hands and clothing with an anti-static dryer sheet to help reduce the possibility of my transformation into the Abominable Foam Dust Man. Not only did it keep much of the dust from clinging, I smelled clothesline fresh!

I did do some initial shaping and bulk foam-cutting with the paring knife, but for the most part I used the rasp to create nicely-rounded slopes and embankments, with frequent pauses to vacuum the foam dust away. I am very pleased with the initial results: 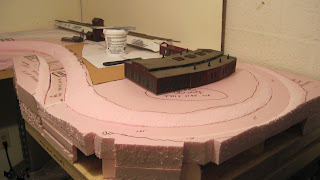 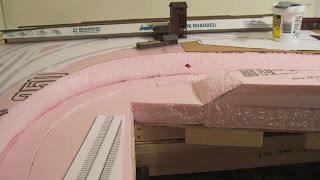 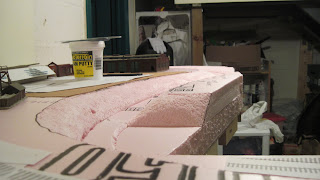 Before laying roadbed on this section I need to apply some putty to fill the gaps on either side of the right-of-way, but apart from that nearly all of the roadbed can be laid down as soon as I find the time, which may come as early as this weekend. Based on my initial work on the rural section I think this should proceed fairly quickly.

The next steps after laying the roadbed are 1) painting the roadbed flat black and 2) cutting any necessary channels in it to allow wires to pass under the track. The first is fairly straightforward: railroads usually laid track on a prepared surface of crushed stone and, in the steam era, coal cinders from locomotives. In addition, flat black is a much less attention-grabbing color than the speckled brown of cork roadbed. The second is an engineering requirement of the turnouts (aka switches), which require power to be run to the "frog" of the turnout - the X-ish shaped piece near where the tracks diverge at left in this picture:

Wow. I had no idea how much work and effort it took to create a layout, etc. I can really see the progress you've made -- and how awesome it will look when completed. Full steam ahead!

Excellent update. One question: what music was playing in pic #3?

Thanks for the comments! Mike, the iPod is set to Shuffle so it could have been anything, although last Monday's work session (stay tuned!) featured a lot of Neil Young and Crazy Horse for some reason.

Neil Young is more than OK. Not only is he a great songwriter and musician, he was also a major player in Lionel during the 90s.

I will relate an almost-amusing anecdote about Neil Young, teh train room and our house's HVAC infrastructure in the next update, which may be as early as tonight if I can get a couple of pictures taken this evening.

You need a train-themed playlist for your iPod while working. Obviously, there's hundreds, but I'll start you off:

You forgot John Gorka's "I don't feel like a train"... to be played, perhaps, when you need to take a break from working on the layout.

Both of you forgot Johnny Cash's contributions, including but not limited to:

(Between the Cash-dissing - tho Mike did include the Mrs. - and the anti-Neil Young sentiments I may have to close comments!)

Sheesh! I didn't mean to dis Mr. Cash. As I said, there are hundreds of possible songs for your playlist.

Mike, all is forgiven! In fact, that's enough for a blanket amnesty for all commenters for a three-week period.