Layout Update #11: When the Mice are Away, the Cat Will Head to the Basement

Last week during the unplanned long staycation, Laura wisely signed up the kids for daycamp for both last Friday and Monday. The latter being Presidents' Day gave us a day at home without the kids, and I spent the bulk of it working on the layout and making more progress.

The first two pictures also show the roughed-in contour of the embankment that will take the upper level track to the bridge over the lower level tracks. The inspiration for that comes from the massive embankment the Lehigh Valley Railroad constructed to take its mainline at grade across the north part of Geneva, NY, on its way from New York to Buffalo. Although the embankment stops sloping rather abruptly near the bottom, I plan to cover that with a more gradual slope for a better transition. 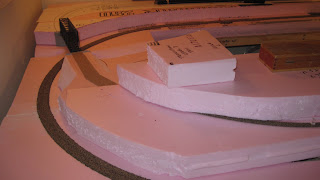 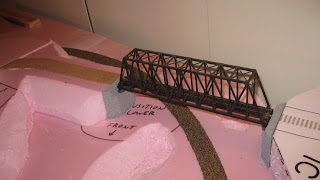 Here you can see where the cork has to be specially cut and formed to accommodate turnouts. The work went a bit slower here because of the additional care required to keep the mainline nice and straight (I used the metal yardstick to align one half of the roadbed, then aligned the second half with the first) and lay out the turnout sections.


Most importantly, I also had to deal with a slight misalignment of the mainline with the engine terminal gradient resulting from slight yet cumulative errors in connecting and placing the paper sections of the printed trackplan onto the surface. Fortunately I was able to mark out the realigned track section last night, and this evening I laid about three more feet of the gradient roadbed after taking the pictures.

I also painted most of the tunnel roadbed black in preparation for (drum roll) laying track, and marked the rough locations of feeder wires with pushpins of the same color os the wires that will be soldered to the track. I also installed the bus wire under the rural section that will supply power to this section of the layout. 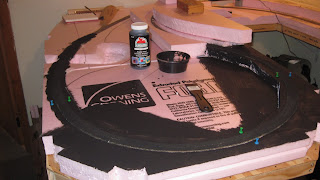 The sections of foam that are also painted black are those parts of the surface that could conceivably be seen by looking into the tunnel portals from outside. This side of the layout will have a relatively tall fascia section to match the elevation of the mountains over the tunnel, and while there will be openings for handling cars and engines and dealing with trouble, I plan to have hinged covers so light does not come out of the tunnel portals.

In a burst of optimism I brought two of my steam engines home from their temporary roundhouse at work (aka my desk drawer) for running on newly installed track. I chose the steamers rather than diesels because I prefer steam to diesel and, more importantly, everything I have read about these particular models (a 2-8-0 and 4-8-2) indicates that they are fussy about track alignment and are therefore good for evaluating trackwork.

Before I get any track down, however, I need to get in some soldering practice on some of my older and more expendable track. Nevertheless, we are moving closer to actual working track!

Slightly off topic, a discussion arose in the comments on the previous update about what I listen to while working, prompted by the spotting of an iPod dock in one of the pictures. Generally I hit Shuffle and get to work, but I am occasionally reminded that the ductwork from our central HVAC system runs into the trainroom and thence to the upper floors, as upstairs residents occasionally comment on the music wafting through the vents. In an incident that I am sure will eventually be considered universally amusing, my mother-in-law was the first to discover these acoustic properties of the ductwork, on Christmas night no less, as the appropriate-for-all-holidays music of Neil Young bid Merry Christmas to all, and to all a good night, followed by 45 seconds of guitar feedback.
Posted by Dave S. at 2/17/2010 07:40:00 PM