I am very pleased to report, albeit nearly a month later, that I have commenced tracklaying! So far I have thirteen feet of mainline down, representing most of the rural section and extending to the lower level of the West Yard section, and secured to the roadbed using clear latex adhesive. To illustrate the progress, here is a by-now-familiar layout plan with installed track shown in solid lines (click the image to get a better view): 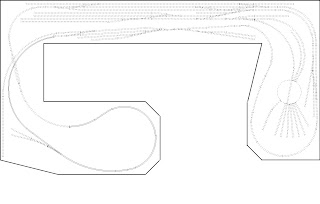 After a brief refresher course in soldering I feel pretty confident about the work I am doing, and that is backed up by what appears to be a consistent electrical connection to all of the track. Following standard practice I am soldering feeder wires to each section of track, which to this point has been 2.5-foot pieces of Atlas code 55 flextrack. The feeders in turn are attached to bus wires running underneath the benchwork using Scotchlok "suitcase connectors"; these have the advantage (from the point of view of a still-learning solderer) of being solder-free, although I understand there are different opinions as to their effectiveness and using soldered joints is invariably better. However, given the relatively small size of the layout I think I can get away with using them. There, I jinxed it.

Here are some views of the completed track: 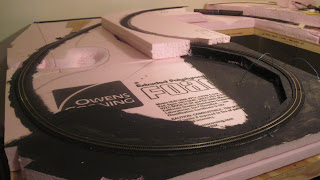 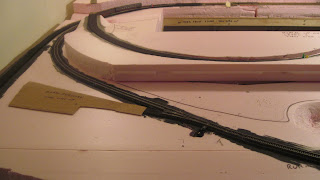 In the first picture you can see, in the right foreground, two sets of feeders, one already soldered to the track and another waiting to be attached.

Here is a closeup of the turnout leading to the rural industrial trackage: 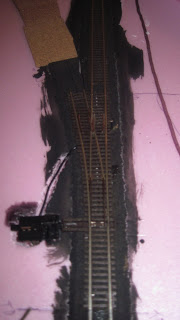 The points are moved using the not-very visible groundthrow to the left of the turnout. The black wire leads to the X-shaped "frog" of the turnout and takes power from one of two track wires depending on which way the turnout is positioned; without the ability to change the polarity of the frog a short circuit would result. The groundthrows and their attendant wiring are bulkier than anticipated and will pose engineering problems particularly in the yard (where a lot of turnouts will be laid out in close proximity to each other), but since I bought a lot of them I will work it out as I go along. I have already determined experimentally that I can run a length of stiff 22-gauge wire through a skinny coffee-stirrer straw over a relatively long distance to throw a turnout, but that will require a lot of pre-planning on my part since the wires will need to run under other tracks. The trackage heading into the lower industrial area on the yard sections will be the first test of that technique and I will try to document it.

In other developments, all of the beveled cork roadbed for the mainline is now in place, and I have begun measuring the slightly thinner sheet cork sections for the lower industrial area and, eventually, the freight yard.

Most importantly, I have brought a few engines home to run over the tracks! In the course of doing so I discovered that the wheelsets on the tender of one of my steam engines are out of gauge, which I discovered while running the engine through the turnout then confirmed using my NMRA gauge. The Atlas turnouts are notorious for being precision-engineered with little tolerance for out-of-gauge wheels, but so far only those wheels have posed a problem for any of the engines.

Code [X] - This refers to the height of the rail in thousandths of an inch. Code 55 track, for example, is .055" in height. The longtime "standard" for N scale, whcih I used on my first layout, is code 80, but the smaller the rail, the more realistic the appearance. I'll try to remember to take a picture of the two types of track side by side; the difference in appearance is substantial.

NMRA gauge - The National Model Railroading Association (NMRA) maintains an encyclopedic collection of standards and practices governing nearly all aspects of the hobby. One of the handiest tools I have (next to my absolutely indispensible Optivisor) is the Standards Gage, which includes most of the frequently-needed measurements on a single piece of flat metal.
Posted by Dave S. at 3/24/2010 08:05:00 PM

I request you wear your Optivisor to the next happy hour.

I have to admit, it was very exciting actually seeing the layout live and watching the train go (mostly) around the track. Most impressive.

Now someone buy this man a beer.