Over the past month or so I took some time to consider what kind of trains - and how many - I wanted to run on the layout. Like many modelers, I'd like to have a mix of long-haul freight trains, local freights to work the various industries served by the railroad, and short- and long-distance passenger trains. When coming up with an operations plan, the questions to answer include:

For question one, there are three answers: west of the modeled area, east of the modeled area, and within the modeled area itself (specifically, the freight yard). For question two, the answer is much the same, although the destinations I envision include the lower industrial area and the various industry tracks around the freight yard. I include in this latter category such locations as the track where coal for the steam locomotives is delivered, and the RIP (Repair In Place) track where minor freight car repairs are made. (Generally speaking, an "industry" is any track where a railroad car can be picked up and dropped off. Among other things, it can be a factory, a track at the passenger station where additional passenger cars are kept, or a track representing a connection - interchange - with another railroad.)

To get a better understanding of how the desired trains would run on the layout, i.e. how an actual section of railroad would operate, I drew up what is sometimes known as an "operations schematic." The goal is to "translate" the model trackplan into a representation of an actual stretch of railroad. With a continuous loop plan such as mine, you decide where to "snip" the loop and stretch it into a straight line. Here's what I came up with:

Laying out the route of the various planned trains onto the schematic made me aware of the heavy emphasis on the section of the layout between the east end of the yard and the east end of yard and the lower industrial/interchange section. (Part of me thinks that maybe I should have planned for a double mainline track on this part of the layout, but that most likely would not have been feasible given the minimum curve radius I wanted. This led me to think that perhaps I should have better options for arranging the west end of the yard, to allow more flexible operation from both ends of the yard in case the scheduled trains started piling up.

This noodling and doodling coincided with the growing sense that the design I had come up with for the main freight yard was vaguely dissatisfying. It provided the appropriate storage and functionality, but something didn't seem quite right about it; it didn't seem railroady.

This past Columbus Day weekend I had some time to kill before an overnight trip to Western New York to visit my parents. (Traveling overnight helps with traffic and really helps with the kids, who are actually very good travelers when awake but are perfect travelers when sleeping.) Laura and the kids were watching TV/napping, so I took an earlier printout of the layout plan and started doodling. This led to a trip to the basement and some test placement of turnouts, which convinced me that I could get away with making the main yard (blocks of cars for running east and west) double-ended, while providing a smaller adjacent yard for local and interchange traffic.

Here is the revised plan: 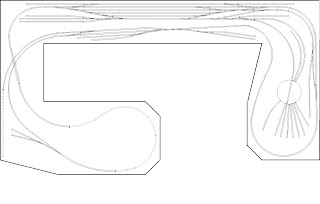 The good news is that I am only short a couple of turnouts, so the great increase in functionality (and, I hope, in realism) will come at relatively low expense. None of the track in this area had been laid anyway, so there is no loss of material or time either.
Posted by Dave S. at 11/14/2010 08:30:00 PM