The weekend before last I managed to put in a few hours of work on the layout. While I only laid a couple of feet of flextrack, I was able to wire up a couple of existing turnouts and run bus wires under the yard section for future track feeder wires. Here's a graphic showing completed track as solid lines: 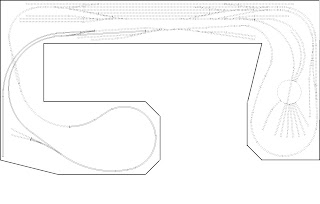 I've also assembled the turnouts and track for the rest of the lower industrial area, and once I have that soldered and installed I'll be able to get the mainline in as far as the east end of the yard.

More importantly, Bryan and Fiona joined the operating crew as engineer trainees, and really enjoyed running one of the steamers and a couple of passenger cars back and forth over the completed mainline. I suggested that we pretend that we are showing railroad officials how much work has been done so far. That was certainly done in real life, although any tracklaying crew working at the rate I have would have been fired long ago!

In other news, the truss bridge I had been eagerly awaiting for completing the mainline over the lower level tracks finally became available: 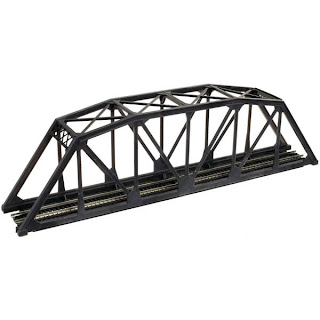 There were other bridges that would have been suitable, but this particular style is evocative (if less spindly) of the old trolley bridge that, when converted to a highway bridge, carried NY Route 31 over the railroad tracks between Lyons and Newark, and over which I passed many times when younger (though later than when this illustration was made - watch it!): It is resting temporarily on the unfinished roadbed; some adjustment of the bridge and suppert piers will be necessary to align it with the level of the track. Even in its temporary position, it was worth the wait!
Posted by Dave S. at 11/16/2010 09:15:00 PM

Which bridge is that? I was trying to refresh my memory via Google maps, and the only place I found between Lyons and N'ark where Rt. 31 crosses the tracks is, unexcitingly, here:

Mike, that is the same spot. The old, re-purposed trolley bridge was replaced with the new unexciting bridge sometime in the 1970s.