Over the last couple of weeks I was able to spend some time in the train room in between birthday parties, Thanksgiving etc. As a result, I have been able to extend the mainline about halfway up the grade around the roundhouse, and completed the passing siding at the lower industrial area: 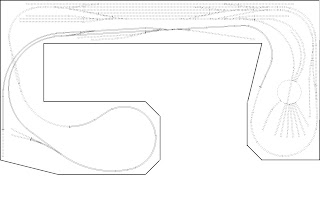 The latter accomplishment now makes it possible for the layout to be operated as a simulation of an actual railroad, in that a train can run from the tunnel/staging area on the rural section, get switched onto the passing siding, then run back off the (visible) layout to the interchange/staging area. This is about the simplest example there is of a "bridge route," a railroad that generates little or no traffic of its own but exists primarily to move traffic between other railroads. A real-life (though defunct) example is the Richmond, Fredericksburg & Potomac Railroad that ran between Washington, DC and Richmond; it is now part of CSX.

More recently, I completed the installation of 1/8" cork sheet in the areas of the layout where the yard and engine terminal will be located. This completes the "sub-roadbed" for the layout and will allow me to proceed with extending the mainline and beginning the construction of the more complex sections of trackwork, as well as setting up the turntable for the roundhouse.

One problem I need to figure out is how to coordinate the throwing of pairs of turnouts in four "crossovers" in the yard area. There are three at the right end of the yard and one at the left end. Those turnouts need to be thrown simultaneously to avoid the possibility of one turnout being set to route into the other, but not vice versa. A wrinkle in this is the fact that this section of the layout rests on four inches of foam, so any control linkages will need to either travel a fair vertical distance or be embedded directly under the track in question. (I am leaning toward the latter for maintenance reasons.) My sporadic Google searches haven't turned up much, and I may turn to the knowledgeable and experienced denizens of TheRailwire for suggestions. As with my job as a software designer, I tend not to inhabit the "bleeding edge" of things so someone has almost certainly already done what I want to do.

I came across your awesome blog

I have added your link in my blog http://denbarblog.blogspot.com/ under "Informative Blogs" Section, so that my blog visitors could also enjoy reading through your blog.

I would be glad if you could also place my link in your blog.
Thanks for your time.