In addition to gift certificates from my favorite train store I also seem to have received a large quantity of spare time in my stocking for being such a good boy this year. Not wanting it to go bad, I used a very large quantity of it this weekend, but not before (Official Disclaimer) frontloading many to-do list items for the New Year's weekend.

As a result, I was able to get about six more feet of track laid, and the main line now extends up and around the roundhouse to the turnout for the yard lead. Here's the updated progress diagram: 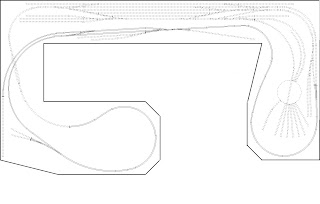 And here's the real thing, in its increasing glory: 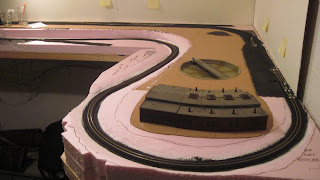 I should be able to extend the mainline to the first set of crossover turnouts sometime this week, but I wanted to make sure that the adhesive securing the yard lead turnout (look for the cluster of pushpins holding it in position) is completely set before proceeding. You can also see that I have test-sited the turnout for the two-track maintenance/RIP (Repair In Place) yard near the turntable. This small yard will take up most of the black-painted section of the layout surface.

The turntable? I thought you'd never ask! Although it is not going to be in service any time soon (there is the matter of the freight yard and engine terminal tracks to take care of first), I had been itching to get the hole cut for the turntable and get it at least test-fitted, more as a psychological milestone than a functional one. This is now done, and you can see that I have also test-sited the roundhouse in its approximate location to get an idea for how it will look. Here is a side shot of the turntable and roundhouse; tracks will radiate out from the turntable to each of the five stalls. 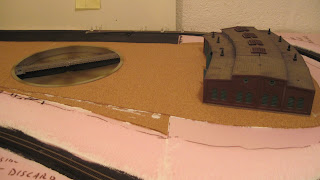 In that shot you can see the funky "weathering" applied to the turntable pit by the manufacturer (Walthers); that will get painted a more (hopefully) natural-looking concrete color, with some rust stains etc.

There are a few more hurdles immediately ahead of me. With the beginning of the yard trackage (off of the yard lead turnout I just laid) I will need to install a new set of bus wires for those tracks; I also need to install the main line bus wires under this section of the layout, and eventually the engine terminal bus as well. The increasing (relative) complexity of the power schematic has already exceeded the capacity of the classic "run a pair of leads from the power pack to the nearest bus terminal strip" approach, so I need to start thinking about designing and constructing the control panel. The panel will form part of the fascia running around the outside of the layout to give it a more "finished" appearance, so I need to start planning the fascia. Finally, the stretch of mainline running from the yard lead turnout ends at the start of the most complex set of tracks and turnouts on the layouts: the east end of the yard, with its crossovers to and from the mainline and the turnouts for the station/passing track and nearby industries (freight station/team track). Those crossovers need to be configured to operate simultaneously to reduce the risk of acidents; at this point I am leaning toward the use of Tam Valley Depot servos, but I need to make sure that I can configure them for dual DC and (eventual) DCC use. If I can't, I may need to pull the DCC trigger early. Gift certificates, we hardly knew ye!

Did I say hurdles? Make that dominoes. But I am excited about these next steps. I have gained valuable experience (not to mention confidence) installing basic stretches of track and turnouts both singly and in sets of two and three, and this will serve me in good stead as the trackwork increases in complexity.

In the meantime, as I mentioned in my previous update the layout is at least skeletally operational, and I have been running trains back and forth with my son and daughter on increasingly longer trips as the mainline inches forward. If I were not concerned about my supply of flextrack I would "flesh out" the industrial areas already served by the mainline, but there is also the matter of converting my fleet of 1980s-vintage freight cars to use knuckle couplers and code-55-compatible wheels. Right now I can run two-car passenger trains and that is it, but I have begun investigating options (they are many and varied and, as always, there is no upper limit on expense) and I plan on consulting with the denizens of The Railwire for guidance.

You lost me after "I was able to get about six more feet of track laid," but I know progress when I see it. Well done, sir! At the rate you are chugging along, the trains may very well be running full steam (or electricity) ahead by the next time you blow us off on your way to Vermont. :-)

I enjoyed myself reading through your blog . Its very interesting and postings are really exceptional. I got lots of unique and useful information from your blog.

I think i should also start learning how to maintain a blog from you. Your blog is simple yet powerful.

I have added your link in my blog http://vigltd.blogspot.com/ under "Informative Blogs" Section, so that my blog visitors could also enjoy reading through your blog.

Kindly visit my blog. If you like it, then please link back. I would be glad if my blog is referred by blog like yours.

Thanks for your time.