A couple of weeks ago I grabbed a bit of free time and extended the mainline from the initial yard access turnout to the beginning of the complex trackwork at the start of the freight yard proper: 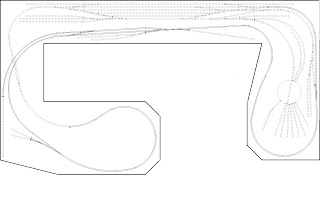 I also went out and bought a sabre saw which I will use, once I take it out of the box, to cut the fascia for the front of the benchwork to improve the overall appearance, hide wiring, and provide places for control panels and other things needed for operating the layout.

This week I put my holiday gift certificates to good use, and have received the remaining turnouts and track I will need for completing the trackwork. I also got a pair of retaining walls for one of the transition section's bridge abutments, but I misinterpreted the website labeling so I have ordered another pair of abutments for the other side of the bridge.

Most of the hours I put in on the layout yesterday dealt with basic terrain forming, as well as getting a much better concept of what I want the scenery on the "transition" (between the yard shelf and the rural section) and yard sections to look like.

First, I worked on finalizing the basic terrain in the transition section. Although I only have one set of bridge abutments, I was able to use them to mark and carve out spots on the bridge approach embankments for their placement. I also widened the stream valley running through the transition section to try and make the contours a bit less abrupt, and traced out a road to run alongside the stream. The place where the road crosses the tracks will conveniently mask the location of a pair of poorly-installed (appearance, not performance) feeder wires. Here's a mockup of the abutments, stream culvert and bridge; if you look carefully you'll notice that the (to-be-modified) bridge abutments hold the bridge about three scale feet below its final elevation. Passengers would definitely feel that. 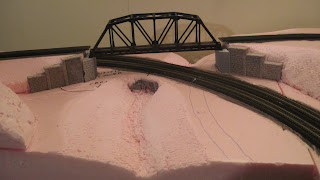 I also roughed in the basic terrain near the yard-side bridge abutment. The slope is a bit steep but already it looks better than the forbidding pink cliff it used to be. In the picture you can see the area in the lower right where a retaining wall will begin, running most of the length of this section. It will be about an inch high and will allow for a gentler slope between the top of the wall and the upper area of the freight yard (the area painted black). 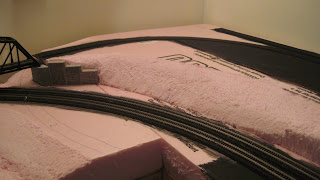 At the other end of the yard shelf, as the mainline begins its ascent to the upper level beginning with a sharp turn under the engine terminal access tracks on the upper level, I will place a full-height retaining wall with stepped abutments on either side. I've ordered another set of those as well; in this picture my single set of abutments continues to earn its keep as a stand-in for the abutments. Note that I will trim the abutments both so they are flush with the upper level and flush with each other. As with all of the retaining wall elements, I will paint and weather them so they look like they were built at the same time. 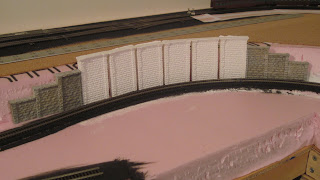 The only trackwork I managed was a test-fit of the turnouts and short (just over a foot) section of straight track for the complex trackage around the start of the freight yard proper. Most of the turnouts in this picture will be powered by servos and controllers from Tam Valley Depot, and I expect to place that order this week. 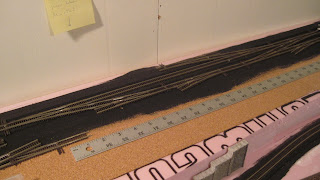 While my work session was short on actual construction, the time spent staring and test-fitting various retaining wall elements, followed by more staring, gave me a very good sense of what I want the basic terrain of the yard and transition sections to look like. Once I receive the remaining wall elements and trim everything to shape, I'll be able to complete the basic terrain of a significant portion of the layout.
Posted by Dave S. at 1/23/2011 06:17:00 PM

I don't want to heap any pressure on you. However, the clock is ticking and International Women's Day will soon be upon us. You know, it's the day when you will have to account many times over for how you've spent your time in the train room over the past year. Will we being seeing your vision or hearing it?

I will doom myself by saying that I believe the mainline will be complete by that most important of holidays and that at least the basic scenery for the transition section will be in place.

I'm very impressed so far. It looks like a real railroad on a pink Mars.