I haven't been able to devote any time to the layout for just over a month, so when Laura took the kids swimming this afternoon, I immediately headed downstairs with the goal of getting the complex, preassembled turnout assembly (see previous update) into place. I am pleased to report success on the installation, although the actual connection to the bus wires and turnout throws (not to mention the servo motors for the crossovers) will have to wait until the next work session.

This is the most complex and exacting work I have done on the layout to date. The matrix of turnouts at the east end of the yard is the single most complex set of trackwork on the whole layout, and correct installation is vital to its overall operation and enjoyment. Pre-assembling the turnouts and track paid off, in that I was able to monitor the alignment of the track sections as I built them off-site, rather than doing the same while trying to install them bit by bit.

Before attaching the turnout assembly to the roadbed and adjoining track, I attached all of the necessary feeder wires and ran them down to the underside of the benchwork. Here is a shot of the work in progress, with the feeder wires serving as temporary load-bearing elements: 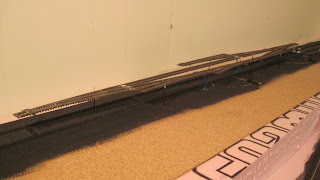 Once I applied adhesive to the roadbed I carefully lowered the entire assembly and attached it to the mainline and yard lead tracks.

Here is the track in its final position: 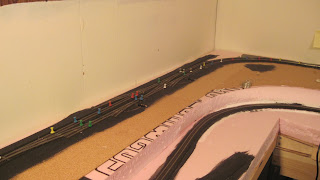 The track progress diagram shows this is quite an advance since the previous update: 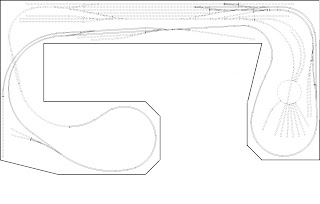 It also allows quite a bit of tracklaying to take place, from the station tracks to the east yard ladder. However, I think the next major effort will be directed toward getting the crossover servos installed, which means a control panel which means hardboard fascia which means etc. We'll see how many dominoes fall before the next update!
Posted by Dave S. at 3/13/2011 07:28:00 PM