I managed to put in a sustained burst of work over the three-day weekend (thanks Laura!) and can report that the train room renovation is essentially complete! With Fiona's help I put on two coats of sky-blue paint on the walls behind the layout on Saturday, then on Sunday I installed one of the two track-lighting (no pun intended, honest) units and began re-installing the ceiling tiles that had fallen. That brief period of work elicited the only real burst of profanity for the entire project, but it was of the highest quality and fortunately the sound did not carry clearly to the rest of the house via the ductwork.

Monday saw the re-installation of the remaining ceiling tiles without serious incident, with additional support provided by installing the brackets for the track lighting by screwing them to the overhead joists. I also drove a couple of screws through tile at a couple of suspicious spots for extra insurance. Finally, in the technically most fraught segment of work, in that I had never done it before and could have killed myself by skipping a step, I replaced the old light fixtures with the connections to the new lights. 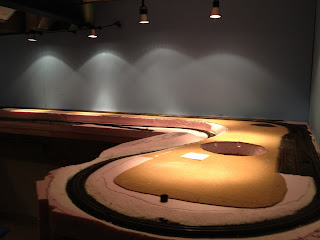 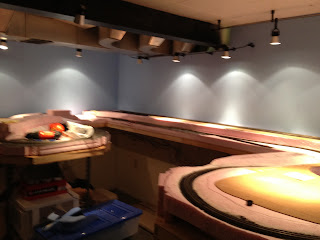 I will be the first to admit that is a bit darker and that the halogen lights do not illuminate the layout evenly. (As the second picture indicates, one of the fixtures is also not working so I need to replace it. Mmmm, IKEA cinnamon buns...) However, the train room is now a much more pleasant place to spend time and I really like the blue behind the layout.

I celebrated yesterday by unpacking my new gift-certificate plunder and running a train around the available mainline track, after doing a general vacuuming and track-cleaning.

Next up: focusing on basic scenery on the transition section so I can get the bridge installed and complete the mainline. Stay tuned!
Posted by Dave S. at 1/18/2012 08:47:00 PM