Layout Update 24: Do Not Mock the Mockup

I managed to put in a few hours of work this weekend, primarily devoted to completing the transition section and the mainline. I gave the bridge a coat of Grimy Black to cut down on the shine, and test-fitted it to the abutments. The rural-side end of the approach to the bridge had to be trimmed back about a quarter of an inch, but everything fits together nicely now. I also cut and fit the wing retaining walls for the bridge abutments and test-fitted them in place as well. Finally, I measured and cut the remaining section of mainline track, and test-fitted it in place. Here's what all this test-fitting accomplished: 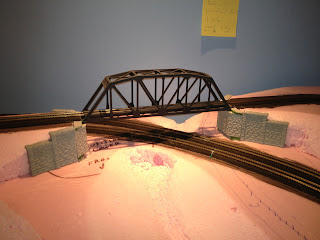 It is no coincidence that I have planned a road crossing right where the feeder lines make their unsightly appearance on the lower level track; the pavement and crossing should cover those up nicely.

The right-hand side of the bridge marks the boundary between two electrical control blocks, but with the lefthand approach track in place I realized that the bridge, even though not permanently affixed, was powered. The next decision was easy: 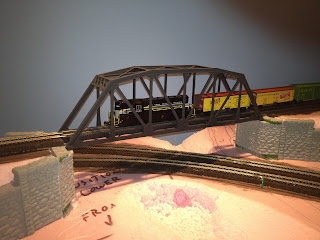 Here we see (albeit in poor focus) the train at about the farthest point it can go without hitting the pushpins holding the track in place, off to the lower right: 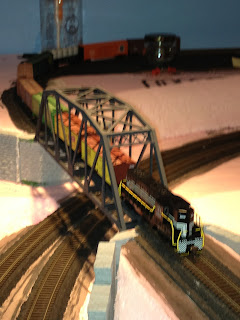 As one of my intended "signature scenes" I am very pleased with how even the rough mockup looks.

I should caution that I am not nearly at the stage where any of this can be permantly installed. The biggest priority is the scenery behind the bridge, which I need to do before installing the bridge. That's going to be quite the demonstration project; even though it is a very small area (no more than a couple square feet) it will involve modeling changes in elevation, water and vegetation. I have experience in exactly none of these things (although I've completed the basic landform by carving and shaping the foam board).

In a late-evening work session, I managed to get trucks and couplers installed on the remaining cars in my work train (crane car and its idler flatcar) and nine additional freight cars. I also want to tackle a steam locomotive (tender at least) coupler conversion so I can run a train behind my preferred type of motive power. However, I am trying to focus all available time and effort on the transition section, since my self-imposed goal is to have the mainline complete by the beginning of March. With my work train back in service, things should speed up!
Posted by Dave S. at 1/25/2012 08:45:00 PM

Is that a train on the track? A momentous occasion for the Slattery Train Dungeon. Huzzah!