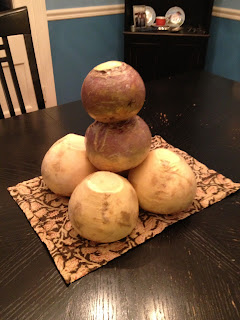 As I write this the preparation of mashed rutabagas is well under way in the kitchen. Laura has completed the initial peeling of the cannonballs rutabagas and the next step is cutting them into chunks for boiling. I am on call in case my version of brute force is necessary, augmented this year by a small crosscut saw. (I didn't think the hacksaw would, so to speak, cut it.)

Pictures and updates to come!

Update: The rutabagas are done and ready for the masses. As it turns out, the enormous pale rutabagas I got this year were easier to cut than the usual ones, and that combined with our newer, more powerful food processor made for a relatively easy process.

First, the peeled rutabagas. To crib from EMM, they're real and they're spectacular: 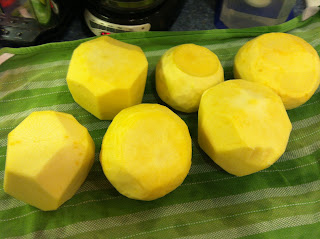 Next, the cubing! This takes a toll on the hands... 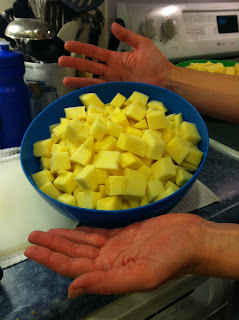 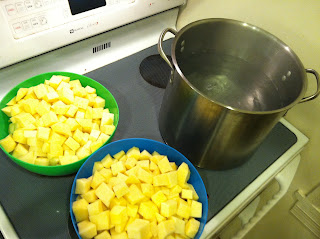 Then puree in our (relatively) new and (absolutely) more powerful food processor: 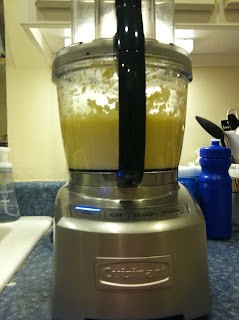 They were delicious! I enjoyed a second helping earlier today with my "to go" package. Mmmmm, rutabagas rock!

Those are some purty rutabagas, Dave! I thought we had some, too. But, after looking it up, it appears we had white flesh giant turnips instead of yellow rutabagas. Now, I feel cheated and jealous!