For those of you wondering whether anything got done on the layout over the summer, the answer is "less than hoped for but not bad under the circumstances." Summer is traditionally a slow time for layout work, as the great outdoors beckons along with vacation and generally not being in the basement. However, I am very pleased to report that major benchwork construction is complete and the shelves/tables have been configured. I even have photographic proof!

This is the view from the entrance to the train room, with the rural section in the foreground, the yard along the back wall and the engine terminal resting on the far steel shelving unit. 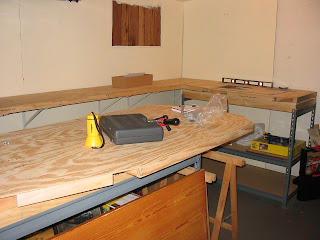 Here is the view from the train room bathroom (whose door, incidentally, features one of these). Note the VIPs/future crew, included for scale, and the square hole in the engine terminal plywood to allow under-table access to the turntable. 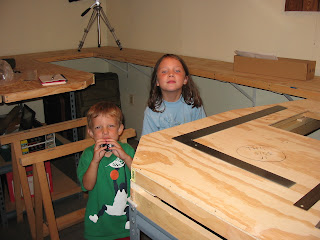 So far I am pleased with how the benchwork turned out. The bracket-supported yard section is rock-solid and, even better, dead level, so cars won't go rolling off on their own. (On my first layout I did not support the particle-board surface sufficiently and the resulting sagging led to interesting geography as well as the occasional runaway cars on yard tracks.)

The next step is laying down the foam insulation sheeting for the scenery base. Minimum depth is two inches (thickness of one sheet) with a second sheet for the yard and engine terminal, and several others to build up the scenery on the rural/mountain section. I also need to attach 8" hardboard strips to the front of the tables for a nicer finish and for mounting the electrical controls; you can see one of the 1x2 cleats for mounting the hardboard in the foreground of the first picture.

Assembling the benchwork and tables was a major psychological milestone for me. I knew that I was making progress each time I assembled an individual section or mounted the shelf brackets, but carpentry stacked against the wall does not a layout evoke. Now I can get a sense of how things might work and, importantly, where operators might stand while running trains.

I was able to put in the several straight hours of work necessary for this achievement as a result of Laura taking Bryan to New Jersey to pick up Fiona from a visit to Grandma. That this involved a carful of misbehaving children on the heavy-traffic return trip makes me all the more grateful.
Posted by Dave S. at 8/27/2009 09:05:00 PM

Yeah, yeah, yeah, that's all fine and good. But what I want to know is: When do we get to see some TRAINS?!

Thank you for this update; I am living vicariously through you, model-railroading-wise.

Also, I an happy that, based on clues within both photos, the "up" side of the plywood was indeed facing up. Although, it occurs to me that it's possible that smallish Northeast/New England areas in the '50s had "This Side Up" gang graffiti about 53 feet long.