The Wings of Eagles, but More Importantly the Talons and Beaks

JJV's most recent post got me thinking, although JWT was quicker on the draw. Falconry could be the ultimate weapon in JWT's and my perpetual War on Squirrels. While there are indeed Bald Eagles in the area we could probably get by with the ubiquitous Red-Tailed Hawk,* and since our hostilities are purely local we wouldn't need horses, to say nothing of a giant Wehrmacht castoff. However, I suspect that if Montgomery County considers farmers markets such a threat they would look askance in a very real and legally binding way on hanging out in your yard with a buteo perched on your forearm. Although it would be seriously badass: 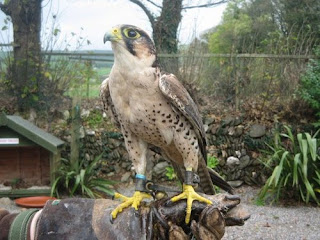 Meanwhile in Virginia I'd bet that even Falls Church would think twice about allowing this sort of thing. Arlington might allow it if we pitched it as organic.

Check out the secret lives of our feathered friends here, although I see in New York the terrorists have already won.

*Dirty trade secret the eagle lobby tries to suppress: You know that great SCREE you hear whenever an eagle shows up in movies etc.? Some Red-Tailed Hawk working for scale supplied that. And JJV would take their union cards away if he had the chance. Which side are you on, boys, which side are you on...

Update: Hey kids, you can learn about falconry at Hershey Park! As fate would have it, we are spending Easter weekend there, so this will be worth investigating. "No no no, the eggs, not the bunny! OK, get the kids in the car NOW."
Posted by Dave S. at 3/29/2011 09:05:00 PM

Actually, in my hunting rules of Virginia are rules for capturing wild raptors for hunting. In order to do this you must serve a three year Padwan/Jedi like apprenticship in Virginia. I think you can find a Jedi Master (falconwise) here. http://vafalconry.swva.net/WhoWeAre.html

Best of all in Virginia the hunting season for raptors is long and includes squirrel. Fairfax and even Arlington appear to allow falcon hunting as only the discharge of firearms are prohibited and bow hunting is also allowed in all of Fairfax.

To my mind, New York's Eastern Gray Squirrel cam has all the appeal of the Colonoscopy Network, if there were such a thing. The viewing public apparently agrees. When I tuned in, the number of live viewers was "1." At times today, by contrast, the eagle cam was hosting over 32,000 viewers.

Even so, you should read the squirrel cam site's write up of the Eastern Gray. I may be narrow minded, but I think they overstate it to suggest that the Eastern Gray may be responsible for the birth of America.

I just checked the squirrel write-up, which has delayed my lunch plans slightly. As for the "birth of America" angle, my considered, nuanced response is NO.

So the British don't like the Gray Squirrel messing up their environment? Tell you what. Come on over and take your starlings back, then we'll talk.