Layout Update #25: We (Actually Do) Need This Fascia Groove Thing

Today was a beautiful day outside: sunny and in the 60s. At the same time Laura was handling the kids all afternoon in exchange for my doing the same yesterday, and normally that would send me straight to the basement without a second thought, except that it was such a nice day. I took a look around the layout room and decided that today was the day to build some fascia, and since that required the use of my saber saw, I'd share the dust and noise with the great outdoors. So I dragged out the sawhorses, clamps, saw, etc., and set up the IKEA tabletop I've had for 20+ years and which has gone from desk to occasional dinner table extension to its current roles (not simultaneous) as portable workbench top and bar for large parties. (Although that would be some party.) 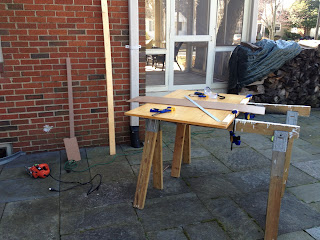 You can see the already-cut 1/8" hardboard fascia sections on the bench, with leftover hardboard leaning against the house next to the 1x3 I used to ensure a (relatively) straight saber saw cut.

After some adjustments resulting from a decreasing adherence to the "measure twice, cut once" principle, I drew pencil lines on the back of each section to indicate where the fascia would meet the 1x3 frame, including a center line for the 1x3 itself. At this point I did not have a definite idea for securing the fascia to the benchwork beyond some kind of nut and bolt arrangement; since the section I was building would cover the front of the long shelf where the majority of remaining track construction will take place, and will also hold the control panel, I need to be able to easily remove and re-attach the sections for easy access. I set out for the hardware store with the only firm criteria being width (1/4 inch) and length (1 1/4 inches).

For some reason the nut/bolt/screw/washer section of the hardware store is the only time when coming face to face with an overwhelming variety of choices does not in fact overwhelm me. (In contrast, NEVER send me to the store for salad dressing.) A few minutes' perusal gave me the winning (for me) combination of carriage bolts (sturdy, smooth finish on exterior) and wingnuts (easy to remove), and I was on my way.

OK, so here is the part where I actually did have to confine my work to the basement, although in retrospect I could have probably done the hardboard drilling etc. on the patio. However, there was enough back and forth and minor adjustments necessary that it made more sense to stick to the basement. Nevertheless, by the end of the first round of work I had this to show for my effort: 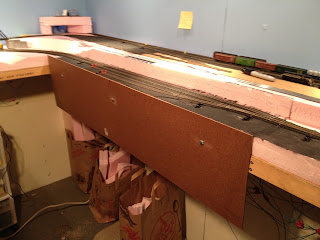 This is not permanent, as I need to remove the remnants of the price sticker and paint the fascia a dark green, although I may wait to paint until after I fit the car-card boxes to the front. The card boxes will represent either industrial locations or yard tracks where freight cars are to be delivered or stored.

With the experience of the first section under my belt, the second section went in a bit easier, although I had to cut a shallow notch in the right-hand side to accommodate the top of the steel shelving unit supporting the engine terminal benchwork. You can also see that the lower edges of the fascia do not exactly line up, but I plan to address that with some form of soft border to reduce the possibility of catching oneself on the lower edge. 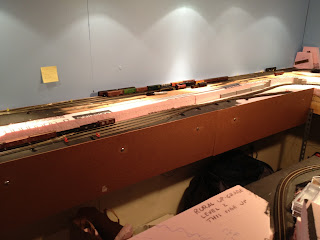 I can now get moving on the design of the control panel, which will fit on the right-hand section. The rest of the fascia will have to wait until the final terrain contours are established, although I may be able to do the work on the engine terminal section without too much trouble.

You may have noticed some odd things in the background of the last two pictures. In the first picture, you can see in the very corner of the layout a test platform for the Tam Valley servo control for the crossover turnouts; I need to build a sturdier version for the next round of testing (the first was promising). In the second picture, stacked in the corner are a couple of pieces of scrap foam with some scrap Code 55 track glued thereon. These are test platforms for track weathering, comparing (for the moment) Rail Brown (kind of greenish) and Railroad Tie Brown. I need to do a bit more testing before committing to a weathering method for the track, keeping in mind also that different kinds of track weather differently according to use. Sidings and yard tracks, for example, often appear more rusty than more-heavily-travelled and better-maintained mainline tracks.